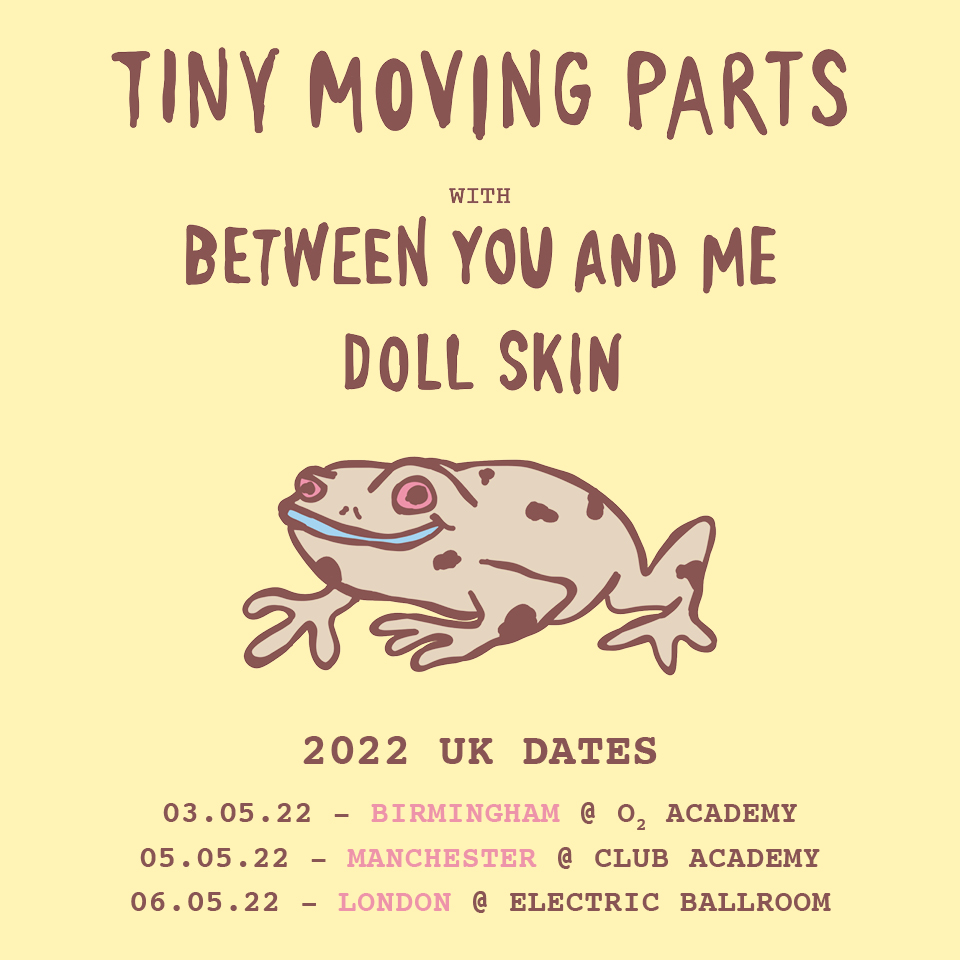 This event has been moved to The Garage.

All tickets purchased remain valid. Customers are advised to retain their tickets and ticket confirmations at this time.

Tiny Moving Parts vocalist/guitarist Dylan Mattheisen is afraid of death. That’s nothing new. In fact, it’s a fear that has flowed,  in one form or another, through every album the Benson, Minnesota band
has released so far. But on breathe, the band’s fifth proper full-length, it’s become more obvious and prevalent than ever. At the same time, this set of songs is designed to help quell those anxieties, both for Mattheisen and the dedicated following he and his cousins – brothers Matt (bass) and Billy (drums) Chevalier – have built up since forming the band in 2008.
“It depends on the day,” he says about how much the thought of his own mortality frightens him. “I mean, it’s inevitable – we’re all going to obviously pass away sometime – so it’s really the thought of ‘Have I lived my years to their full potential with the time I’ve had?’ I feel like writing really helps me personally and I feel like it can help others, too – just feeling like, ‘Oh, I’m scared to death of dying, but they’re all scared, too. Why are we all so scared?’ We’ve just got to deal with it, but knowing you’re not alone is a really big thing in this world and I feel like that really helps.”

That is the very crux of breathe – that despite everything we suffer in this life, we’re not alone. Rather, we’re all in this together. That doesn’t just refer to our impending mortality, but to everything else that weighs us down – heartache and mental health struggles and anxiety and existential dread and the state of the world. The result is both Tiny Moving Parts’ darkest and most lyrically direct record to date, but also their most uplifting. It’s darker because all those worries and afflictions that weigh us down get worse the older we get, but at the same time, those fears inspired a hope and defiance that turns those issues on their head. The idea is not to fear death or let those things control or overpower you, but shake them off so you can enjoy our short time on this planet. It’s a record full of loss, but one that refuses to focus on those absences.
“I just feel as time goes on that everything means more and more,” says Mattheisen. “So this record covers things we’ve talked about in the past – the fear of dying, losing someone through moving away or the passing of someone – but it concentrates more on the positives, and being happy things happened instead of sad they’re taken away. It’s about finding that mindset to keep on powering through.”

That, of course, is where the meaning and importance of the album title comes into play. These songs are a reminder, in a fast-paced world that seems to be collapsing around us, that we don’t necessarily have to do the same, whatever the weight on our shoulders. Breathe’s title was chosen because, when the trio were thinking of a name, it was the one word that kept jumping out from the lyrics, a kind of subconscious reminder about the subconscious thing we all do to stay alive.
“It’s just a simple word that means so much more than you think,” says Dylan. “Obviously, everybody needs to breathe to live, but even just a simple deep breath can change your whole day. It can change everything. When things get overwhelming and life gets hard, taking a couple seconds to take a deep breath can really change your perspective and help you move forward.”

Written in between tours since the release of their last record, Swell, released in January 2018, breathe finds the band moving forward sonically as much as they are pushing through emotionally. Recorded with longtime collaborator Greg Lindholm, who oversaw seven songs, and established pop producer John Fields (Jimmy Eat World, Goo Goo Dolls, All Time Low), who handled the other three, breathe is full of the same emotionally-driven blend of math-rock, pop-punk and emo that they’ve made their own, but it also branches out. Sonically, these songs are more layered and confident musically, and a number of them – including “Medicine”, a song that about Mattheisen’s struggles with mental health, and “Icicles (Morning Glow)”, a song about overcoming loss through the power of friendship – are interspersed with electronic flourishes, while the heart-torn “Vertebrae” is the band’s first ever acoustic track features a banjo solo. Elsewhere, “Bloody Nose” overtly confronts the singer’s fear of death, while album closer “Hallmark” addresses the small comfort, whether real or false (or perhaps both), that a Get Well Soon card can bring to someone dying of cancer.

That sounds dark, but this is an album that never truly or fully succumbs to that darkness. Instead, it rails against it, demonstrating that the fight against adversity is always worth it. It also shows the power of opening up about and confronting the fears that so often take hold of you, and how much that can help.  That’s something perhaps best exemplified by “I Can’t Shake”, a song that details the first time Mattheisen remembers having a panic attack.
“I was a 20-year-old having a stressful day, getting ready to play a coffee shop in Baltimore,” he says. “We were told we wouldn’t receive any money, but there was free coffee for the band. I felt pretty out of it and decided to drink a whole bunch of coffee, which resulted in a caffeine overdose. To this day it was one of the scariest moments of my life. I remember splashing sink water on my face multiple times in the bathroom trying to get out of this state of mind, but I couldn’t for quite some time. But there was nothing bad happening around me – it was all in my head.”

That, then, is the lesson of the record, the message of the band – that we shouldn’t let our fears and anxieties control us, and that, if we’re open and honest about these things, that can only serve to help us through them. To that extent, breathe is more than just an album. It’s an emotional crutch. It’s moral support. It’s the friend we all need at our darkest times. It’s the sound of a band coming to terms with their own mortality, their own anxieties, their own self-doubts. And it’s a reminder that, as long as there are songs sung back as if our lives depend on them, we are never alone.