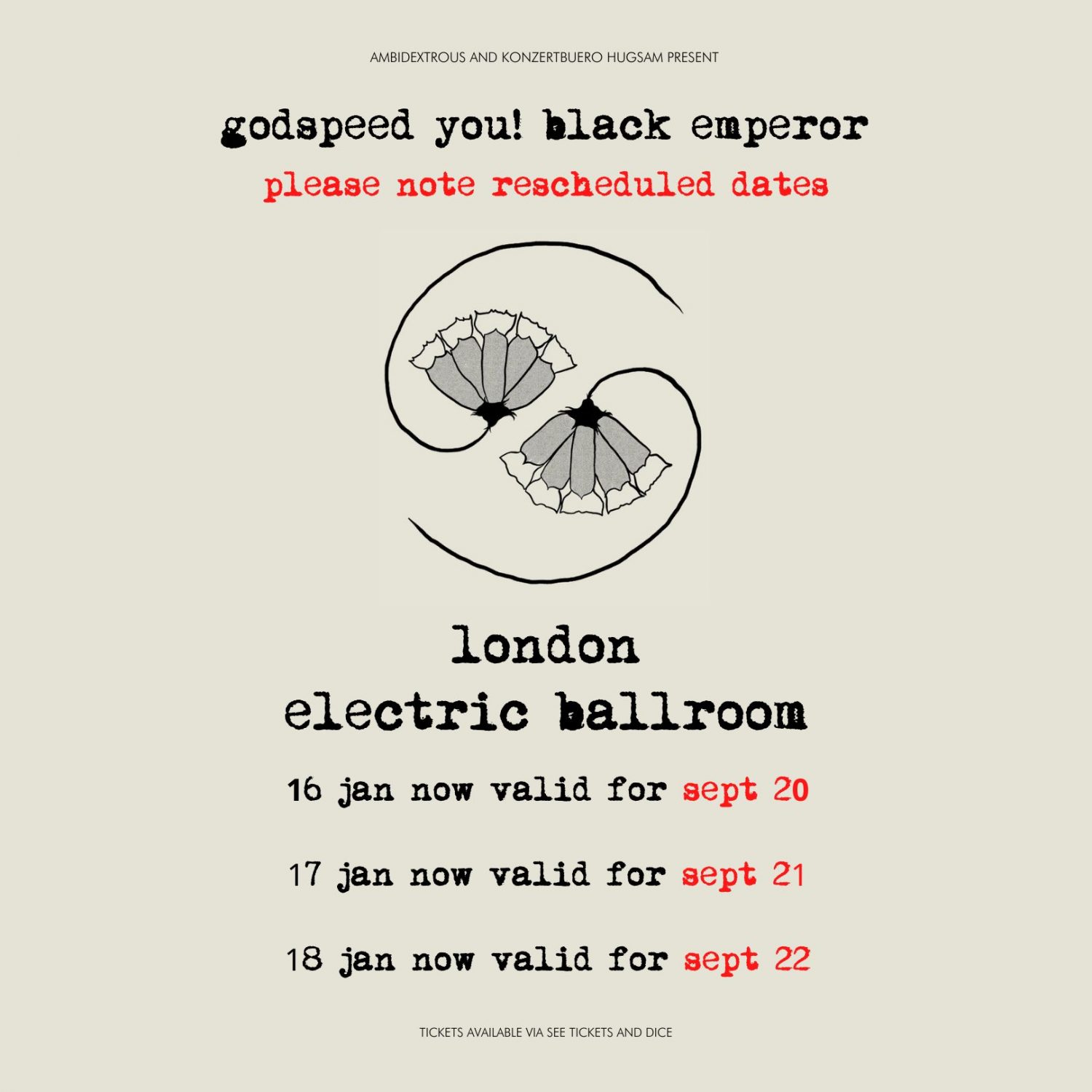 It is with regret that the upcoming Godspeed you! Black Emperor show due to take place at London Electric Ballroom on 16th January 2022 has been rescheduled and will now take place on 20th September 2022.

All tickets purchased for the original dates remain valid. Customers are advised to retain their tickets and ticket confirmations at this time.

Godspeed have issued the following statement:

this is us, bummed.

upcoming scotland, u.k. and euro shows are all postponed. not because of pandemic, but because we’re living through the mess that austerity has wrought- a death narrative writ by dumb boss-logic, where workers are expected to slave thru plague years w/no reward but more precarity.

we’ll announce rescheduled dates once we know them, and u.s. and kanada shows will move forward as long as the numbers fall.

after the deluge we’ll see you next to the ocean somewhere, lit by burning megayachts, every star in the sky an asphyxiated billionaire entombed in their vain mars-rockets.

GYBE returns with another soundtrack for our times. As the heretical anarcho-punk spirit of the title implies, Godspeed harnesses some particularly raw power, spittle and grit across two riveting 20-minute side-length trajectories of noise-drenched widescreen post-rock: inexorable chug blossoms into blown-out twang, as some of the band’s most soaring, searing melodies ricochet and converge amidst violin and bassline counterpoint. Field recordings and roiling semi-improvised passages frame these fervent epics, and two shorter self-contained 6-minute pieces find the band at its most devastatingly beautiful, haunting and elegiac. Poignant atmospherics, noise-drenched orchestration, drone, hypnotic swingtime crescendos, inexorably-layered towers of distorted clarion sound: STATE’S END encapsulates every beloved facet of the band. Twenty-five years on, this new album is as vital, stirring, timely and implacable as any in Godspeed You! Black Emperor’s storied discography.

Just as STATE’S END summons the gamut of Godspeed’s constituent sonic trademarks, so the album artwork spans the entirety of the band’s visual history: the grainy monochromatic photography of recent releases finds its way onto the inner sleeves, while the gatefold cover art harkens back to the iconic graphics of earlier classic records like Slow Riot For New Zero Kanada and Lift Your Skinny Fists Like Antennas To Heaven. STATE’S END features illustrations by William Schmiechen, with the front cover taijitu flowers and back cover tear gas canisters rendered in raised thermographic black ink on the double-vinyl album jacket. The illuminated cross from Godspeed’s debut F#A#∞ also makes a reappearance on the inside gatefold drawing, in recurrent homage to the electrified hilltop landmark crucifix of the band’s Montréal hometown.

STATE’S END was recorded and mixed in Montréal in October 2020 at the group’s homebase studio Thee Mighty Hotel2Tango by Jace Lasek, the veteran award-winning indie producer (and co-founder of The Besnard Lakes) who works with Godspeed for the first time on this recording.